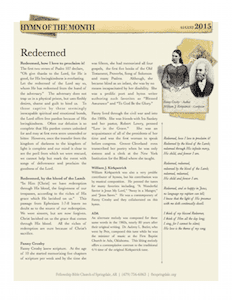 Redeemed, how I love to proclaim it!
The first two verses of Psalm 107 declare,
”Oh give thanks to the Lord, for He is good, for His lovingkindness is everlasting.
Let the redeemed of the Lord say so, whom He has redeemed from the hand of the adversary.” The adversary does not trap us in a physical prison, but uses fleshly desires, shame and guilt to bind us. To those captive by these seemingly inescapable spiritual and emotional bonds, the Lord offers free pardon because of His lovingkindness. Often our delusion is so complete that His pardon comes unlooked for and may at first even seem unneeded or bitter. However, once the transfer from the kingdom of darkness to the kingdom of light is complete and our mind is clear to see the peril from which we were rescued, we cannot help but mark the event with songs of deliverance and proclaim the goodness of the Lord.

Redeemed, by the blood of the Lamb
“In Him [Christ] we have redemption through His blood, the forgiveness of our trespasses, according to the riches of His grace which He lavished on us.” This passage from Ephesians 1:7-8 leaves no doubt as to the source of our redemption. We were sinners, but are now forgiven. Christ lavished on us the grace that comes through His blood. All the riches of redemption are ours because of Christ’s sacrifice.

Fanny Crosby
Fanny Crosby knew scripture. At the age of 10 she started memorizing five chapters of scripture per week and by the time she was fifteen, she had memorized all four gospels, the first five books of the Old Testament, Proverbs, Song of Solomon and many Psalms. Although, she became blind as an infant, she was by no means incapacitated by her disability. She was a prolific poet and hymn writer authoring such favorites as “Blessed Assurance” and “To God Be the Glory.”

Fanny lived through the civil war and into the 1900s. She was friends with Ira Sankey and her pastor, Robert Lowry, penned “Low in the Grave.” She was an acquaintance of all of the presidents of her time and was the first woman to speak before congress. Grover Cleveland even transcribed her poetry when he was only sixteen and a clerk at the New York Institution for the Blind where she taught.

William J. Kirkpatrick
William Kirkpatrick was also a very prolific contributor of hymns, but his contribution was by musical composition. He penned the tunes for many favorites including, “A Wonderful Savior is Jesus My Lord,” “Away in a Manger,” and “Jesus Saves.” He was a contemporary of Fanny Crosby and they collaborated on this hymn.

ADA
An alternate melody was composed for these same words in the 1960s, nearly 80 years after their original writing. Dr. Aubrey L. Butler, who went by Pete, composed this tune while he was the minister of music at the First Baptist Church in Ada, Oklahoma. This lilting melody offers a contemplative contrast to the traditional 4/4 time of the original Kirkpatrick tune.